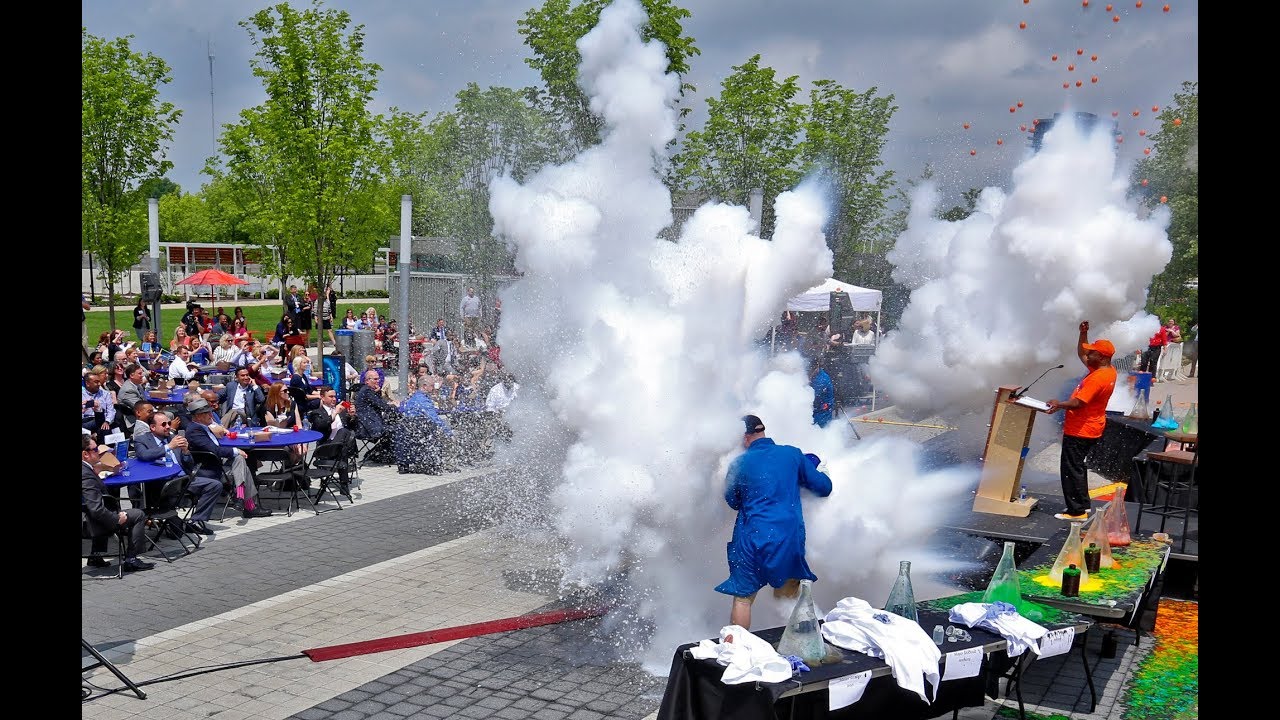 Foam shot from beakers and balls exploded out of trash cans on the plaza in front of COSI this afternoon as the science center and Battelle announced the creation of a new COSI Science Festival. Much like the announcement itself, the goal of the event is to show people that science isn’t just important to the economy—it’s also fun.

COSI President and CEO Frederic Bertley and Battelle President and CEO Lou Von Thaer announced the new venture amid a crowd of onlookers that included numerous elected officials from the state legislature as well as Columbus and surrounding cities. “We are launching the largest science and technology and cultural event in Ohio’s history,” Bertley said.

The free festival will be held May 1-4, 2019, and will showcase science around Central Ohio. Though still in the planning stages, officials anticipate more than 60 events will take place over the first three days in Columbus and the suburbs—in places where people “live, learn and lounge,” Bertley said. On the final day, a science-themed carnival will be held on the Scioto Peninsula on both sides of COSI. “We will engage, inspire and transform lives and communities through science and technology. Just watch,” he said.

Bertley emphasized the festival as a way to demystify science, technology, engineering and mathematics (STEM) fields and improve science literacy in the community—an issue that also impacts skills gaps and workforce development. The interactive nature of the festival will mirror COSI itself and aims to be accessible to everyone “from the womb to the tomb,” he said.

Battelle has pledged $850,000 in funding over three years for the COSI Science Festival as part of the nonprofit research and development giant’s ongoing goal to further STEM education. “Science isn’t scary. Science isn’t nerdy,” Von Thaer said. “We firmly believe that everyone can find a place in STEM.”

In true COSI fashion, the “epic announcement” ended with a hands-on demonstration. “It wouldn’t be COSI without a science experiment,” Bertley said. Ten mayors, from Columbus and some of the suburbs in which festival events will be held, helped demonstrate the power of a catalyst by making “elephant toothpaste” (water, detergent, color and hydrogen peroxide), which shot into the sky. COSI staffers then launched balls from plastic trash cans, some of which also went airborne.

In the coming year, COSI is embarking on a campaign to engage the community and will travel to other festivals and fairs around Central Ohio to promote the COSI Science Festival. Community members can nominate “STEM Stars” on social media and propose events for the festival. For more information, go to cosiscifest.org.